Last week we attended an under 5s event in a local park, called the Teddy Bear’s picnic. Jonty was excited to go and took his much loved (read much chewed) Pooh Bear along with him. There were lots of crafts, puppet shows and a story time, but the highlight for me were the teddy races. The children were divided into their age groups, given a toy buggy to put their teddy in and lined up on the starting blocks (or in this case hula hoops).

As Jonty lined up with the other 2 year olds Joel gave him a man-to-man pep talk. He explained the route and encouraged him to run as fast as his little legs would take him. Jonty’s Nanna was standing at the finish line cheering him on and I was on photo duty…

Soon he was under starters orders… Ready, steady, go! All the other children charged towards the finish line, but not Jonty. He was having none of it! He first observed what was going on around him and when he was good and ready he took a leisurely stroll to the end of the race.

Of course he came stone last, but that didn’t phase him at all! He wasn’t worried about where anyone else was. He was too busy enjoying the novelty of pushing Pooh Bear in that buggy and he strolled across that course with the biggest smile on his face!

On reflection, I think there is a great lesson for me in Jonty’s leisurely stroll… I think that sometimes (ok often) I am so busy trying to achieve something, to cross the finish line, to juggle a whole lot of things, to keep up with those around me that I completely forget to enjoy the moment, to just be who I was made to be and to cherish what I have in my hands now (even if that is just a toy buggy with a teddy strapped in).

I hope that Jonty’s slowest race ever reminds you of this too! (now if I can just keep this perspective in school sports days! 😉 ) Here are some pictures of the pep talk and the race! 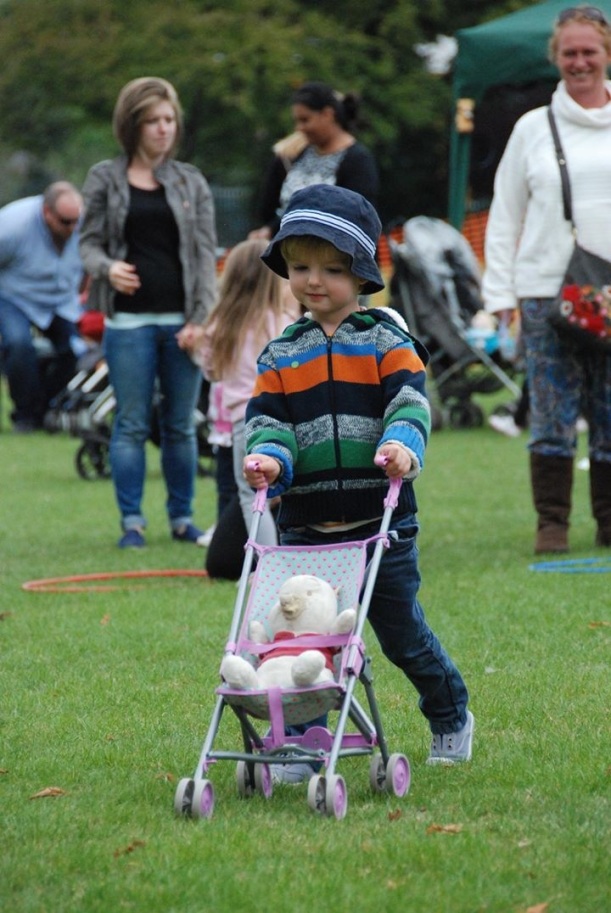